Is Your Boyfriend Cheating?

If you are on this page looking for a catch your boyfriend cheating app then you probably have already suspected he is cheating.  I think we all know when things are not right.  Maybe your boyfriend is cheating and pulls his phone away when a text message shows up.  Maybe he does not want you to see what he is doing on his phone or the computer. You are not crazy for thinking your boyfriend is cheating on you.  Just consider some of the stats:

By the Numbers: Cheating Statistics

Cheat To Get Back Spouse

Did not know about cheating

Are right about knowing their partner is cheating

Most Likely to Cheat:

As you can see there is a lot of boyfriends cheating in the world today.  But how can you know for sure?  That is what I will show you in this article.

Catch Your Boyfriend Cheating Apps – How they Work

Your biggest concern is probably just getting a hold of his phone to put a spy app on it that will catch him cheating on you.  If he always has his phone on him this can be pretty hard.  Plus you will need to know the unlock code to his phone.

If you can’t get his phone or you do not know the unlock code you will not be able to spy on him and catch him cheating on you.  There are plenty of websites that claim they can get all his text messages without you ever needing to touch his phone.

Some spy apps will tell you that they can get all his text messages without you ever needing to touch his phone.  This was true a while ago using Apple’s iCloud.  But Apple patched this hole years ago and it no longer works. (ahh… the good old days).

Just know if you see a spy app that claims to be a catch your boyfriend cheating app and you do not need to touch his phone they need to have a money back guarantee.  Why?  Because the app most likely will not work anymore and you will want your money back.

If your boyfriend uses an iPhone you are not going to have much luck with finding a Catch Your Boyfriend Cheating App.  Over the past few years Apple has plugged all of the exploits spy apps used to catch him cheating on you.

It used to be that you could sign into his iCloud account and get all his text messages without him ever knowing.  Then Apple made it so it would email him if you tried to read those text messages.  That still worked to a point.

Then Apple made even more changes.  They quickly required something called “2 factor authentication“.  With this turned on the only way you could read their iCloud back up was to get your hands on their phone and get a special code.

Eventually Apple made it so none of the spy apps could read iCloud anymore (including pcTattletale).

But maybe you can get a hold of his iPhone and you know his unlock code?  Can you still use a Catch Your Boyfriend Cheating App on iPhone?  Well not really.  You want the spy app to be hidden right?  Apple will not let you do this unless you jailbreak his phone.

Jailbreaking his phone will void his warranty.  It will make the phone act funny and even worse he could get hacked.  In general it’s not a good idea.  But let’s say you are really desperate to find out for sure if you boyfriend is cheating on you. You ARE willing to jailbreak his phone.

There are spy apps out there that claim to be a Catch Your Boyfriend Cheating App and work on iPhone if you jailbreak it.  But you will still run into problems.

Apple has made their new iOS so secure that not even the jailbreakers can no longer jailbreak it.  So you are stuck.

TIP:  Does your boyfriend use a computer?  Try a computer based Catch Your Boyfriend Cheating App If your boyfriend has an Android phone you are in a lot better shape than iPhone.  There are many android spy apps like pcTattletale that work great on Android.  But keep in mind you are still going to need to get a hold of his phone and unlock it.

A lot of people ask me:

Can’t I just send him a text message or something and start spying?  I can not get his phone.

This seems pretty reasonable right?  But imagine how this would work for a spy app like pcTattletale.  Lets say pcTattletale could start spying on someone by sending them an email or text message.  They open it and the spying begins.

What would stop someone from signing up with pcTattletale and spamming out links to spy on hundreds of phones?  Google would squash this right away (and they have).

So when you think about it Google and  Android could never allow a spy app to be slipped on the phone through a text message or email.  They think A LOT about this stuff.

So let’s assume your boyfriend does have an android phone and you do know the unlock code.  Now what?

How To Catch Your Boyfriend Cheating with an App

If you know the unlock code to your boyfriends phone you have a VERY good chance of catching him cheating.  No longer will you be worried about what he is really doing.  You will know for sure in a very short time.  Just follow the steps below:

TIP:  Most pcTattletale customers find their boyfriend cheating within 48 hours.  You will know right away. Another thing you can do is put the pcTattletale catch your boyfriend cheating app on his computer.  Even if he has an iPhone or Android phone and you can’t put the spy on his phone you can still see a lot from his computer.  Maybe he goes on Facebook and chats it up with an old EX.  Maybe he likes to browse adult sites.  You can still learn a ton from watching his computer.

Spy Apps like pcTattletale can show you everything he does on his computer.

To spy on your boyfriend when he uses the computer just follow these steps:

Dealing with the What you find out I hear all the time from pcTattletale customers about how shocked they are to find their boyfriend was really cheating.  Usually it is with an EX girlfriend through facebook.  pcTattletale makes videos of everything he does on his Android phone or Windows computer.  You watch the “YouTube” like videos of him sending text messages and reply to her on facebook.  You will quickly get all the evidence you need. 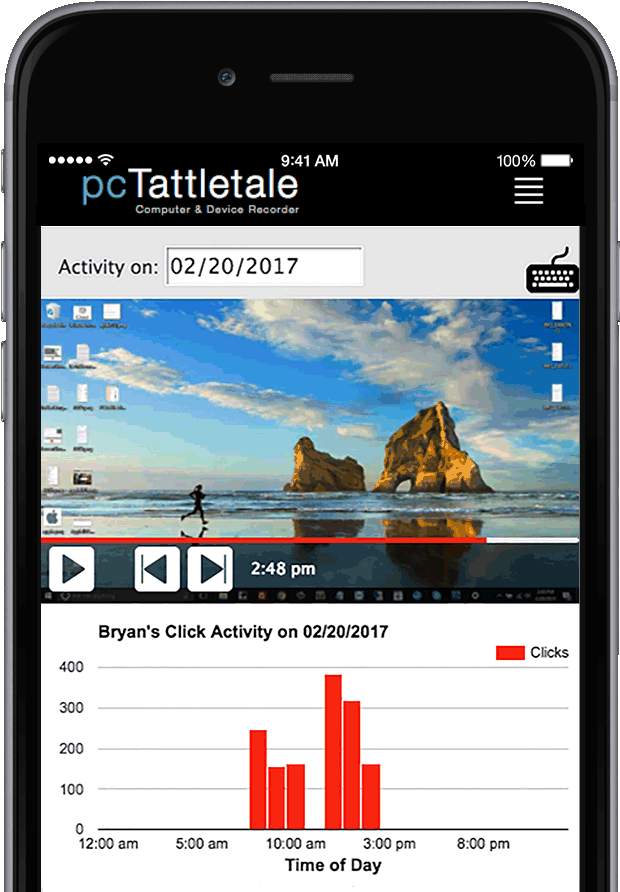 TIP: Save the pcTattletale useage videos as MP4 videos so you can keep them forever.

When see him cheating first hand your heart will sink.  You can get very emotional and want to confront him right away.  Keep your cool and read the next section. So now you put pcTattletale on his phone, computer or both.  You see him texting his Ex and making plans for the weekend.   But he told you he was busy.  You are boiling mad.  Here are some things to consider before you blow up at your boyfriend.

First he will likely get mad a your for spying on him.  I know he is in the wrong but keep in mind people get defensive when you catch them.  Expect him to lash back at you over putting the spy app on his phone. It can really turn the tables.

Can you confront him in a way where he will never know you have an app on his phone?  I mean maybe you can ask questions about his plans for the weekend that can catch him in a lie or where he can see he isn’t making any sense.  Again he will get mad at your for asking so many questions.  But you are armed with a lot of knowledge and can steer the conversation so he paints himself in a corner.

Just know when you confront your boyfriend you will not get an answer like this:

I screwed up and I’m sorry

No.No. Instead he will make you out to be the bad guy.

In conclusion you are going to have a lot better luck catching your boyfriend cheating if he has an Android Phone.  iPhones will not work for what you want to do. Use a spy app like pcTattletale to see him cheating first hand.  Be careful when you confront him.  He will get mad at you!  To get started today sign up for the pcTattletale free trial by clicking the button below: